Rhinoplasty refers to plastic surgery that involves making changes to the internal and external structures of the nose. Many patients in New Jersey and the Philadelphia area seek nasal surgery to correct the cosmetic appearance of the nose, a procedure known as Cosmetic Rhinoplasty.  Others seek nasal surgery to restore sufficient nasal breathing, with a procedure known as functional rhinoplasty.

Functional rhinoplasty, as it is termed, seeks to correct nasal obstruction and restore nasal function. A functional rhinoplasty can involve repair of many areas of the nose including the nostrils, nasal septum, and nasal valves, as well as the nasal turbinates. The nostrils and nasal tip may require repair to fix areas of instability and collapse secondary to trauma or prior surgery. A deviated nasal septum may need to be straightened to allow better airflow through the nose. Collapse of the internal and external valves, also caused by trauma or prior surgery, requires correction to also reestablish stability. Enlarged nasal turbinates may need to be reduced to allow better airflow through the nostrils.

Various other functional problems can also be present, which lead to nasal obstruction.  Dr. Corrado is board certified in both Facial Plastic Surgery and Otolaryngology (ear, nose, and throat surgery) providing him expert knowledge in dealing with all functional and cosmetic nasal issues.  A thorough consultation with Dr. Corrado, will allow him to accurately diagnose your cause of nasal obstruction, and allow him to offer treatment to restore normal nasal function. This procedure is not considered an elective cosmetic procedure, therefore, insurance coverage often applies.

The issues presenting when one is in need of a functional rhinoplasty may include, but are not limited to:

General anesthesia is typically used for Functional Rhinoplasty.  Dr. Corrado will have a detailed conversation with you regarding your anesthesia options.  Incisions are made to allow access to the underlying cartilage and bone. When these incisions are hidden completely inside the nostrils, the procedure is referred to as a Closed Rhinoplasty. Often, a small incision may need to be made at the base of the nose to improve exposure, in which case it would be an Open Rhinoplasty.  Both incisions are well camouflaged, and typically heal with virtually no visible scarring.

Generally, if a deviated nasal septum is present, the septum is straightened in the beginning of the procedure. This procedure is called a Septoplasty. Deviated portions of cartilage and bone are often removed, but sufficient cartilage is left behind to ensure adequate structural support of the nose. Most Functional Rhinoplasty surgeries address some sort of lack of nasal support. Depending on the patient, cartilage may need to be grafted to help gain support. These cartilage grafts are often taken from the nasal septum itself during the Septoplasty portion of the procedure, although sometimes ear or even rib cartilage may need to be harvested. The cartilage grafts are then placed in areas of instability inside the nose to build up the nasal support structures to prevent further collapse post-operatively.

Further reshaping of the nasal cartilage may need to be performed with sutures to the cartilage, allowing the cartilage to be repositioned and suspended. If the inferior turbinates are enlarged, they are typically reduced at this time. Reduction of the turbinates causes them to shrink in size, improving the patency of the nasal airway.

At the conclusion of the procedure, the outside of the nose is often taped and some form of external cast may be applied. Small soft plastic nasal splints are placed inside the nose. Nasal packing is typically NOT used by Dr. Corrado.

An improvement in nasal breathing is the primary benefit of a Functional Rhinoplasty. The procedure may also straighten the nose, repair post-traumatic or congenital deformities, and overall improve the nasal structural framework. A Functional Rhinoplasty is a procedure to improve the function of the nose, and may entail a great range of techniques depending on the patient’s goals, the anatomic problems and the Dr. Corrado’s recommendations. Patients should enter into discussions with Dr. Corrado with specific goals in mind, and should understand the procedure in its entirety.

WHAT IS TURBINATE HYPERTROPHY?

The nasal turbinates are structures located inside the nose, along the outer wall of the nasal cavities. They are composed of bone and soft tissue.  Their primary function is to regulate airflow and to warm and humidify the air we breathe in.  There are three sets of turbinates known as the inferior, middle, and superior turbinates.  The inferior turbinates are located in the lowest position in the nasal cavity, just inside the nostril.  The inferior turbinates can sometimes be excessively large or swollen; a condition termed turbinate hypertrophy.  This enlargement can be due to swelling of the soft tissue covering of the turbinate, known as the mucosa.  The inner framework of the turbinate which is composed of bone can also be enlarged.  Enlargement of Hypertrophy of the turbinates is a common cause of nasal obstruction.

HOW IS TURBINATE HYPERTROPHY TREATED?

Turbinate hypertrophy is initially treated medically with intranasal steroid or antihistamine sprays, oral steroids, oral decongestants or oral antihistamines.  When medical therapy fails to treat the problem surgery can be performed to reduce the size of the turbinate to relieve nasal obstruction.  Turbinate reduction refers to surgery that is directed at shrinking the soft tissue and/or bony components of the turbinates to alleviate nasal blockage. 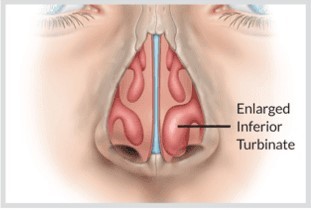 What is Nasal Valve Collapse?

Nasal Valve Collapse is a common cause of nasal obstruction.  Nasal valve collapse results from the dynamic inward collapse of the lateral nasal wall with inspiration. This condition typically results from a lack of adequate cartilage support.  Inspiration through the nostrils results in negative pressure inside the nasal cavity.  When the lateral nasal wall lacks the appropriate cartilage support, the sidewall is unable to withstand the negative pressure in the nasal cavity, resulting in collapse. Nasal valve collapse can occur at two levels in the nose: the internal and external valve. 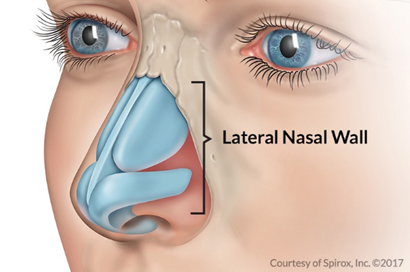 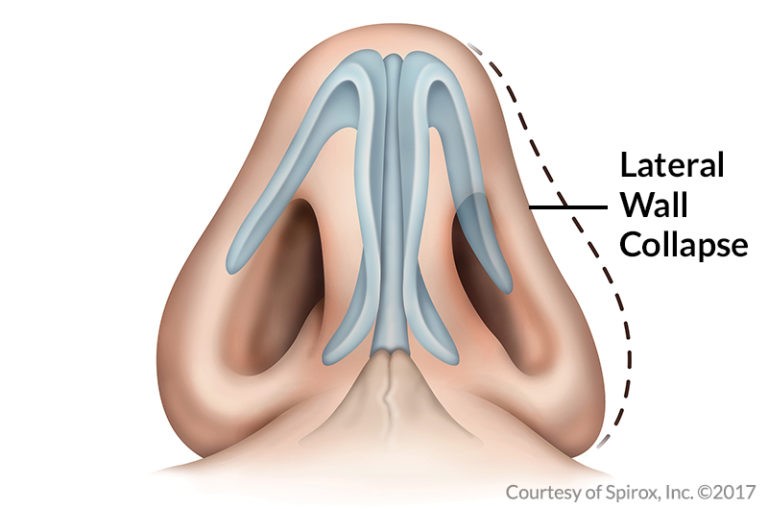 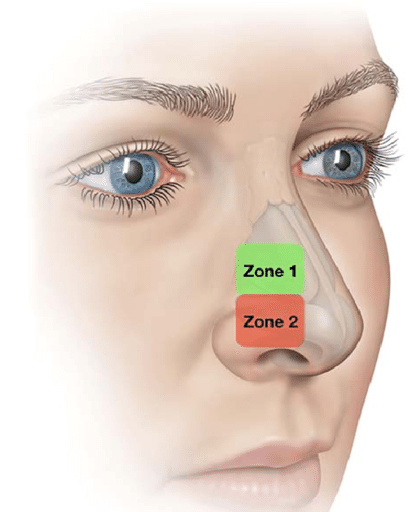 HOW IS NASAL VALVE COLLAPSE DIAGNOSED?

The physician will discuss your symptoms of nasal obstruction, including the severity, as well as any factors which alleviate or exacerbate your symptoms.
The physician will take a thorough medical history including discussing any prior nasal surgery, chronic nasal or sinus disease or history of nasal trauma.
A thorough nasal exam and possible nasal endoscopy will also be performed to evaluate your nose.

HOW IS NASAL VALVE COLLAPSE TREATED?